I'm not such a good boy as I seem

The interview is from the magazine "Semana" (printed version), of Octobre 31, 2012.
Marian Cazorla
photos Rafael López and Antena 3 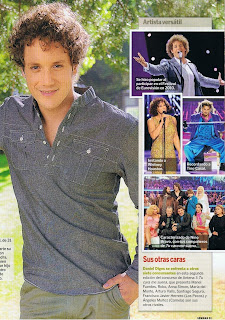 The second edition of "Tu cara me suena" again conquers the audience, this time on Monday nights on Antena 3. Daniel Diges is a part of the team of eight contestants prepared to confront each other harshly in order to win the prise. After his experience with Eurovision two years ago, where he ended 15th, now he's ready to declare himself a winner.

Daniel, who is being the hardest rival of the contest?

I believe that the most difficult is Roko and Anna also is there, she is of those nerds who say that they haven't prepared the exam an then they do it great. We all get along very well, but there is a lot of competition, we take it quite seriously.

How do you prepare the characterizations?

It's all about surprising the audience with someone different from us: for me it would go well Christian Castro but that wouldn't surprise anyone, better to do different singers, like Nino Bravo, Whitney Houston, Tino Casal... I'm a bit obsessive to prepare them, because I come from musical where we prepare things for two months, so when I get someone, I pass the entire day studying, in the train, during the breaks in the theatre in my dressing room, I watch videos at home...

Who was the hardest to do?

It was quite something with Tino because my voice is different from his and also the poses and gestures... I've been able to bring out one side more sensual and more of the badass, because I'm not such a good guy as I seem... The most difficult one has been the one that will be seen in two weeks, but I can't say who it was.

What's the secret of the success of "Tu cara me suena"?

The secret is good mood and good vibes that there is among us. We have a great time doing it and that reaches the spectator.

Do you get advices from your companions?

Angel Llacer says to e that I'm too methodical, that I need to get crazy more.

I would like Freddy Mercury, but they already did him twice, and also I would like to imitate Madonna.

Your wife and your son watch it?

My girl is fan, already has been last year, she was hooked to the program and now she still is, of course. The little one even recognizes me. At the theatre no, as in "La Bella y la Bestia" I'm playing gastón, the first day he came to the dressing room and asked me where his dad was... 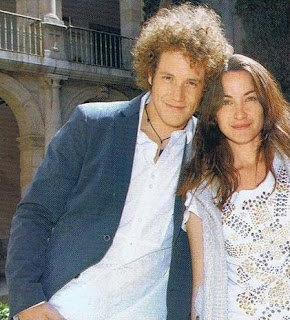 You are also on the tour with this musical, how do you manage to combine those two things?

I'm doing it more or less well because I have an understudy who replaces me in the play, but yes, it is quite hard because I have to shoot the program and to do several plays a week. It's been tiring but it's gonna last only three months and I think it's worth the trouble. What worries me the most is the voice, and I try to take care of it a lot, I drink herbal teas, I don't smoke, I do exercises...

And how is your family taking it?

What we do is that my girl and my son go with me to many cities. The little one like theatre a lot, I don't know the times he saw the play, we look like a "troupe" of the old circuses... But we are taking it quite well. Generally I'm calm, in Eurovision I was much worse, I was very nervous, there was a lot of pression...

After the success of the disc with covers of the '70, are you preparing another one?

We don't know will there be another disc. Right now I'm in one of those moments in which you need to decide what to do with my career and not to get stuck.

NOTE:
Thanks a lot to Laura and her @DanielDigesSite for making us the photos of the interview (photo1, photo2, photo3)