Here you have the overview of the tweets of the night of the first concert of Poker de Voces, on April 25, thanks to TeatroTwitteado


TeatroTwitteado
Just a little time left until it starts! RT @davidordinas: Sound check, first the band and then us!! yfrog.com/h266xmmsj yfrog.com/h4on9bsj

I give you the overview (translated) of the tweets of DDigesENGLISH of last night, May 23, while following the second performance of Poker de Voces with the help of TeatroTwitteado


DDigesENGLISH
We are here once more to follow @pokerdevoces with @TeatroTwitteado ;o)
TeatroTwitteado
We are already on the doors of the Teatro Häagen-Dazs Calderón! yfrog.com/gzszisbj

"With our careers, we can fill the theatre too"

R.G.OTERO
Four of the protagonists of Los Miserables have became "independent" in order to offer a "scripted concert" in which they are passing through, above all, the themes of the musical theatre. After a successful premiere, Póker de voces will be performed for the second time. 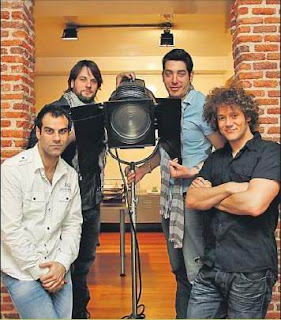 Ordinas, Rauch, Vidal and Diges (from left to right), between 30 and 38 years, have been working in the most important spanish musical productions in the last decade. PHOTO: JORGE PARIS)

DANIEL DIGES
You can see this article here on the page 20.
ACTOR AND SINGER. STARS IN ‘LOS MISERABLES’
AND WILL PERFORM WITH ‘PÓKER DE VOCES’

The actor and singer poses among his keyboards at the favorite place of his home: the bedroom
/ GRAPHIC REPORTAGE: SERGIO GONZÁLEZ
See more >>>
Posted by Aida at 11:14 AM No comments:

Email ThisBlogThis!Share to TwitterShare to FacebookShare to Pinterest
Labels: interview

POKER DE VOCES ready for their second concert in Madrid

You can find this interview here. (El artículo original aquí)

19/05/2011
After the welcome they got on April 25, Daniel Diges, David Ordinas, Gerónimo Rauch and Ignasi Vidal unite again their voices in a second concert at the Teatro Häagen-Dazs in on Monday May 23, 2011. 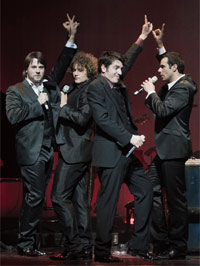 Email ThisBlogThis!Share to TwitterShare to FacebookShare to Pinterest
Labels: interview, Poker
Newer Posts Older Posts Home
Subscribe to: Posts (Atom)
Note that I hold no legal rights to the content of this blog, neither the songs, videos or photos nor any of the articles. They all belong to their respective owners, I'm just the person who uses them for a good cause.